Mystery of the Merkaba
Energy Revealed

Within the universe is patternization and specific movement. There is no randomness in nature anywhere throughout the entire universal structure. Looking at the smallest known particles of existence or the very largest we see the same pattern repeat itself over and over again. These patterns follow the process of pure geometry always moving to the path of least resistance. Throughout all nature there is movement, there is life. Creation takes place within this structural arrangement of movement.

To understand the nature of the Merkaba is to understand the nature of life itself. The Merkaba is the “Magic Symbol of Life.” To view the inner meanings of the Merkaba it is important to look at the symbols behind the meaning. The Merkaba in and of itself is a symbol for the specific energy movement of life and for the creation of life. Understanding what this specific matrix of energy is will lead us to a central understanding of life's matrix. The Merkaba energy has been around throughout all of time and is contained in all universal structure and phenomena. Prophets and wise men throughout the ages have recognized this centralized energy and have attempted to communicate its profound connections. The word Merkaba is a word from the Hebrew language literally translated to mean; “Chariot.” The consonantal root of Merkaba is R-K-B from which derives the general meaning of “To Ride” (the four wheeled chariot of God).
Scholars have attempted to understand the symbolism behind the meaning for thousands of years. What is apparent there is a base patternization being described by prophets of old as an alignment of “wheels upon wheels.” These wheels are synchronized to the second dimensional axis of space with the cardinal directions of east, west, north and south. These wheels or vortices create an alignment to the structure of space. Connected also with these descriptions is the structural arrangement of the visible rainbow structure. The Merkaba's patternization gives life to the nature of matter as we know it. A detailed analysis of the Merkaba's history and future prophecies will be gone into in chapter ten's “Revelation Four Diagram.” 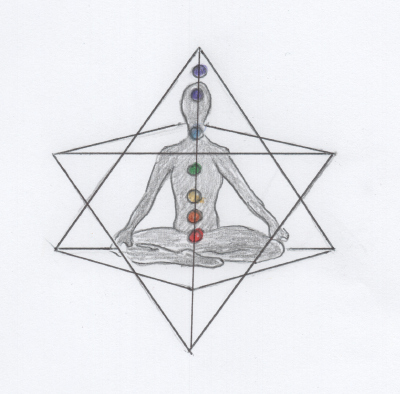 Moving in consciousness to the very center of the Merkaba matrix can fully connect the observer to life energy for it is at this center life happens. In pure geometry or Sacred Geometry this is the center of the vortices, where all the energetic patterns merge as one. On a simple of level, it is the centralized point of a circle and a triangle. Here the energies of the expansive circle merges with the energies of the contractive triangle. The blending of “infinite” circle and “finite” triangle becomes one on energetic levels. Moving this same relationship into the third dimension we connect the Merkaba energies when we merge the sphere with the tetrahedron. The keystone in understanding the Merkaba is to connect to the energies at the very central perspective. Prophets and sages have referred to this as the point where we “ride” the energy of the “wheels” that spin forth from a central axis or “throne.” To harness this spinning energy at central perspective we literally place ourselves in authority, sitting ourselves energetically in the center of all that is. The clearest example of this perhaps may be the seven interlinking circles – Logos Circle Seven. Here the observer connects with the four same sized circles to the east, west, north and south; that is to say, the dimensional directions of space left/right and front/back. The seven circles connect to the central perspective.

This connection to the throne perspective at the central axis of interlinking circles has been utilized by sages for thousands of years. Another widely acclaimed usage for understanding the Merkaba symbolism is seen in the centering of one's self in the Star Tetrahedron's energy field. Commonly in the Merkaba's imagery a meditator is seen at the very central inside position of the star tetrahedron. A star tetrahedron is an overlapping of two tetrahedra in perfect balance to each other. The two dimensional counterpart of the star tetrahedron is what is referred to as “The Star of David” which is two overlapping equilateral triangles balanced to each other at center. The star tetrahedron contains an octahedron at its center. An octahedron has eight equilateral triangles upon its face upon which can be placed eight tetrahedral pyramids. In the star tetrahedron it is the intersection of the two tetrahedra that form the inner octahedron. An octahedron can also be placed symmetrically inside the matrix of a cube. The six furthermost points or vertices align perfectly with the central portion of the cube's six outer walls. Adjoining eight equally sized tetrahedral pyramids to the triangle faces of the octahedron will define the corners or vertices of the cube. 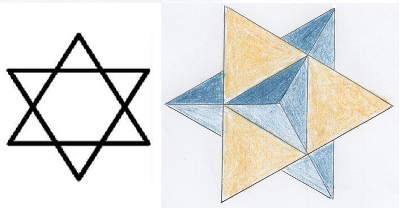 The balance of energy between the star tetrahedron, octahedron and the cube shows an extraordinary synergy of relationships. It is this balance that creates a very strong connection with universal field of energy. Aligning one's self with the center of a cube is to experience the Merkaba to the fullest. At observer's center the life source of the Merkaba is activated. One synergistically connects in many ways. Within the central energy field of the star tetrahedron one connects to the eight corners of the cube as the eight vertices of the star tetrahedron form a perfect alignment. Experiencing the central energy field of the octahedron one connects with the six directions of space as the vertices of the octahedron form energy points left/right, front/back and top/bottom to the very most central position of the cube's outer walls. 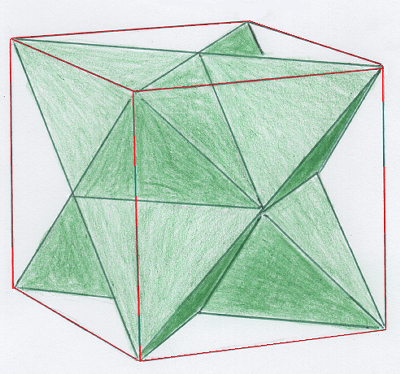 The matrix of the cube holds many wonders for the observer in their quest to fully understand the Merkaba life source energy. Merkaba is the centralized energy that spins within all life. As the observer consciously aligns with this energy then a grander alignment to universal energy takes place. The key is balance. The more one can optimize balance within their lives the more they will flow with the all-balancing, all-pervasive design of universal consciousness. 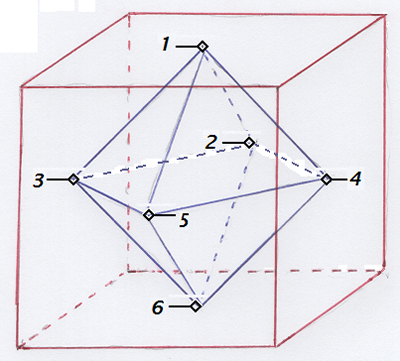 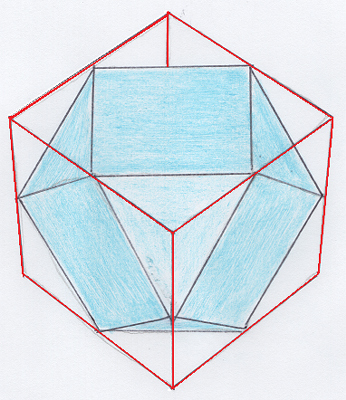 World renown geometrician and inventor Buckminster Fuller coined and widely popularized the name for the cuboctahedron as “Vector Equilibrium.” Primarily, it is named this because all 12 points or vertices of the cuboctahedron are identical to each other all forming the same angle and length to the center axis from the outer shell of its form. Remarkably, this allows for a number of interesting synergies to the cube and the sphere. When one places six equally sized circles around one this is known as the closest packing of circles. Drawing a line between the center points of the circles produces an equilibrium known as a hexagon. All the lines are equal sizes and all the angles to the true center of the central circle are the same. The vector equilibrium is the three dimensional counterpart of the two dimensional hexagon. The vector equilibrium is the formation that appears when one has the closest packing of spheres. Twelve spheres can fit perfectly around one in a process referred to as “kissing of the spheres.” All twelve outer spheres are touching the center most sphere. When one draws a line between the center point of each of the twelve outer spheres the lines needed to form a perfect vector equilibrium appear.

The vector equilibrium fits perfectly to the matrix of a cube as well. The six directions of space are accounted for on each as the outer six squares align to left/right, front/back and top/bottom. (illustration 4.5) At the point each of the squares of the vector equilibrium touch the triangle next to it is the very center of the twelve lines needed to draw the cube. 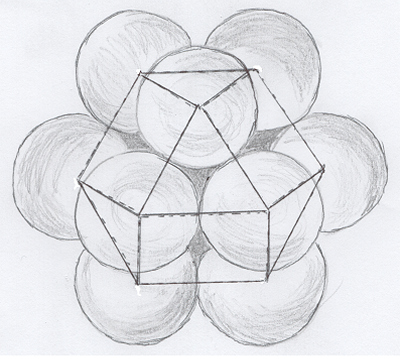 These same twelve points are the points of the center of the 12 outer spheres found in the closest packing of spheres. Energetically, standing at the center of vector equilibrium one connects with the life energy of the Merkaba as universality comes alive in pure base geometry of a sphere, tetrahedron and cube on a three dimensional level. The observer energetically connects to center universal sphere as the closest packing of spheres form a matrix to their heart center. The Merkaba energy continues to synergize as the 8 points of two tetrahedra, the star tetrahedron, align to the 8 points of the cube's corners. Within the center of the six square walls of the vector equilibrium the observer will simultaneously connect to the energy matrix of the points of the octahedron and to the center of the six outer walls of the cube. It is the combination of octahedrons and tetrahedra that form a perfect infilling of space, as does the closest stacking of cubes. As the observer connects energetically to the infilling of the space matrix through the natural alignment of these platonic solids they extend their energy from personal heart center to centers everywhere. The energy flows along a grid matrix that extends accommodating and filling every micron to the furthest reaches of space.