Let your journey into the heart of the rainbow begin. Rainbows are everywhere with their bending of the white light. Within this bending, or refraction, of light a magical process happens that connects the dimensions of space and the world of matter as we know it. Rainbows with their mystical qualities and promise of deliverance have appeared in nearly every religion and spiritual discipline in the world. It is rainbows that connect our soul to the supernatural as they appear majestically after a storm. Rainbows are our sign-in-nature, giving us a grander connection and “sig-n-ature” of a Universal Source and Power. This signature the rainbow offers is our signpost to realizing what humans have sought to realize for eons of time.

You the observer will come to realize that the connection is grander than ever imagined. The journey into the heart of the rainbow is one of Universal Commonalities. It is a journey into the very heart of the Great Merkabah that originates from the absolute center of the Universal Circular Vortex. The rainbow journey flows upon the base matrix of space itself bringing absolute connectivity to Sacred Geometry. The rainbow and Sacred Geometry flow from the same natural wellspring. The rainbow offers within the specifics of its color spectrum a direct and wondrous connection to Sacred Geometry – the base building blocks of the universe. The door to understanding universality is being made manifest through the rainbow matrix. The rainbow connection has been observed by many different religions and cultures for centuries.
Every year the Rainbow Equation brings grander and grander connections. In science we look for hypotheses that are repeatable. In the study of Sacred Geometry and consciousness we see more and more connections within the rainbow and its subsequent oneness with the Unified Field Theory. The rainbow shows us it is not a Theory of the Unified Field, it undeniably shows the Reality of the Unified Field. This grand connection of the rainbow to Sacred Geometry and the Universal Circular Vortex is our connection into free energy through harnessing the omnipotent power of the space matrix. The Rainbow Equation offers a gateway into understanding multi-dimensional travel, levitation and the eternal, living and all healing structure of space. The rainbow is the bridge between you and everything. Love is the bridge between you and everything. It is the unifying light of consciousness and love that connects and allows it all to work together as one. The rainbow and its created matrices upon the inter-workings of Sacred Geometry simplifies the process of universality immensely. It is for this reason it is the sign and the signet for the arrival of the New Age – A time of the Permanent Golden Age. 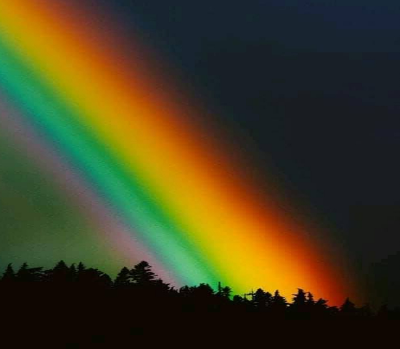 Within the Universe there is a deep and profound mystery. A mystery that connects all life and all life is connected by. This is most simply expressed by the statement, “It All Works Together As One.” Yet, what is this mystery that connects us with all life and what is the connection? Metaphysicians, wise men and sages have sought to understand this connection for eons of time. In the universal scheme of things there is a universal language. This is a language that is found everywhere and in everything.
To understand the language of the universe we are asked to consider what commonalities there is that connect the most of all that that is. In this we can begin to understand there is a common thread between all. Throughout the universal structure there is Light. This light is alive and it is conscious. There are certain base patterns in this light and for this reason we can ascertain the universe is conscious and alive. To be conscious means that there is an awareness of existence. In this awareness there is connection to universal source as the being becomes aware of something outside itself. As soon as this awareness comes into consciousness there is a natural tendency to want to know more. In other words, the being desires from its central focus to understand and bring order to the world outside its self. The being desires from its heart center to become more conscious and extends this conscious desire outside itself into the universe all around it. Through this conscious heart driven desire the being begins to place order to its desire. All conscious beings naturally desire to bring order and further connection to their life streams. This desire is called Love. It is Love that propels all consciousness into growth and further connectivity with source.
Love is the connective fabric that brings together all consciousness everywhere. Light, also known as awareness or consciousness, is very similar to Love. Love is what originates from the being driving it to discover more connectivity with its source. As soon as the being moves into this discovery, at that very instant, it becomes conscious of a grander reality. In reality Love drives the being into seeing the light. Light and Love and Life all work together as One. The third universal reality that is occurring here is the phenomena of Life. Life is an essential ingredient in the triad of Universality. Life is the impulse that occurs when the being moves from its heart center into the universal field. It is that very “Movement” that creates Life. Without the impulse to discover further connectivity beyond perceived reality there could not be expansion in life. In All Universal function there is Life.
The Universe is teeming with life from the smallest quantum unit to the largest. Love, Light and Life is the language of the Universe. Indeed, it is the Universal Language of the Universe. Since Love, Light and Life are found throughout the universe and literally are everywhere it is possible to discovery the secrets of the universe through a complete examination of any of its parts from the smallest to the largest. However, such an examination may take a very long time to fully comprehend the connection into all. To simplify our search we could start with the commonalities found in all. Then we can see if these commonalities are synchronistic to other realities either known or unknown throughout the universe.
In the structure of the universe there is one thing we observe – All conscious beings observe from their center. This is called their center of conscious awareness. It is starting from this center a foundation for observation occurs within the dimensional field. The Being observers there is order. All centers of and by themselves could be said to be unconscious. It is in the movement to discover order awareness of life is created. The first movement is an awareness, “I Am Alive.” This realization within itself is only the starting point. The next realization is, “I am alive, but what am I?” This begins the journey to self-discovery. At this point of realization the being begins to look “outside” itself for connectivity to outside source. It should be noted, there is really no “outside of self” for all reality is contained within because it is the consciousness of the observing being that draws its reality into being. The so-called reality does not express itself in that being until a heartfelt desire goes forth to see it and it is upon this seeing that “reality” comes into awareness.

G.U.R.U. Gee You Are You
Generation Z Inspired, Applied and Activated
Using the RAINBOW in All Areas of Your Life to Aid Humankind and Our World.