Everything is In Perfect Shape

All forms have three dimensions, they have height, width and breadth. Therefore, energetically we can connect more fully to three dimensional energy structures than two dimensional ones. In Pure Geometry the three dimensional representation of the square is a cube. A cube has equal height, width and breadth. When one observes a single cube there is a single unit of measurement along any of its six walls giving it its symmetry. Geometricians refer to this as a single stacking of a cube or a 1st Frequency Cube. Frequency in this case refers to the distance of a single wall. Since the measurement is the same in all directions then there is only one unit of measurement or frequency. In the double stacking of cubes the term would be 2nd frequency cube. This means that for every single cube there is a another cube next to it. The 2nd frequency cube has two layers of four equally sized cubes for a total of eight cubes. 2nd frequency implies there is a stacking of two cubes or walls. Each time a stacking or layering is added an additional frequency is added.

In the 3rd frequency cube there is a triple stacking of cubes. 27 smaller cubes stacked together in the closest stacking of cubes produce one larger cube. Starting with the most central cube there are two cubes at equilateral proportions to it in the six directions of space. The six directions of space are left/right, up/down and front/back. The 3rd frequency cube is also called the “3F Cube.” The balance of 26 cubes stacked around the central axis of a single cube in this manner allows the observer to centrally align with the six directions of space while a synergistic relationship to the matrix of surrounding cubes is established. In Sacred Geometry energy is created by alignment with points, lines and walls. Points of energy in Sacred Geometry are also referred to as Nodal Points. The more alignment to these nodal points, lines and walls the more the connection to nature and the universal matrix.
Many will recognize the 3F cube as what has been popularized as the “Rubik's Cube.” The concept of this “mind puzzle toy” is to move the walls of nine cubes around scrambling the arrangement of the outer colors and then proceed to see how long it will take to return it to its original arrangement. Erno Rubik was born in Budapest, Hungary in 1944. His father was an engineer and his mother a poet. 1971 to 1975 he was an engineer and then became a Professor at the Budapest College of Fine Arts. He continues to explore the universal connection between nature and universality. He writes the following in explanation of his life long interest,

“Space always intrigued me, with its incredibly rich possibilities, space alteration by (architectural) objects, objects' transformation in space (sculpture, design), movement in space and in time, their correlation, their repercussion on mankind, the relation between man and space, the object and time. I think the CUBE arose from this interest, from this search for expression and for this always more increased acuteness of these thoughts.” 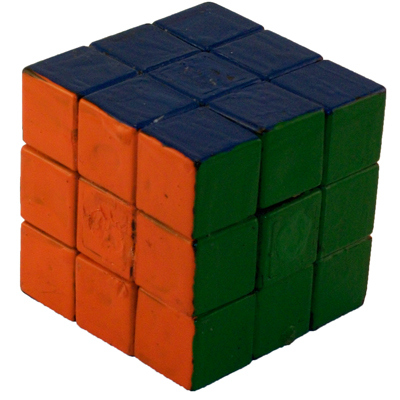 Many of the forms presented in “Color Spectrum Sacred Geometry” are directly attributable to the popularization of these models by Erno Rubik.

The puzzle shapes and the matrix therein are axial relationships found in the nature's base geometry. The connection between Sacred Geometry and the rainbow's visible color spectrum was discovered by Kenneth Ernest Christy in the 1970's. Kenneth Christy was born February 14, 1950 in the United States. At a very young age he had severe whooping cough which left him mentally and physically disabled. By the age of 10 he had overcome most of these limitations with a surprising result, he became an amazing savant. Kenneth Christy passed in 2016. He was a mystic, metaphysician and scientist who devoted his life to understanding the matrix of space, time and dimension. 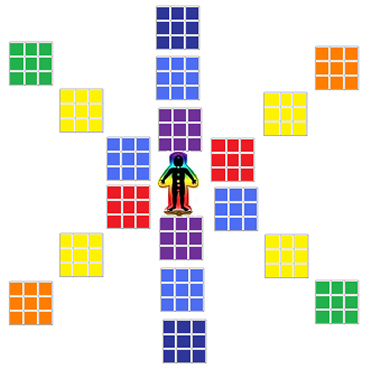 Aligning the matrix of space to the 3F Cube becomes even more synergistic when it is aligned with nature's visible spectrum of light. The color spectrum of light completely and naturally merges with the matrix of the 3F Cube. When the rainbow spectrum is combined with the internal and external sectors of the 3F Cube it becomes the “3rd Frequency Rainbow Cube.” Observing from the central perspective of the very center cube the observer aligns not only with the six directions of space but also with the seven colors of the visible spectrum. Standing energetically at center the observer aligns with the color frequencies of orange, green and indigo. This is to say there is an alignment experientially with left/right, up/down and front/back. The center cube has six walls. Starting at the very center cube the “Outer” left/right walls of this most central cube are painted red and yellow. Moving the frequency of the rainbow from inner to outer, the next outer wall of color repeats itself as the red moves into yellow and visa-versa. All the outer walls of nine sectors inside the cube are red and yellow on the left/right axis of the 3F Rainbow Cube. The very most outer wall and shell of the 3F Rainbow Cube is orange along this axis.

The walls of the 3F Rainbow Cube are painted and therefore opaque. However, if the outer walls of the inside cubes were translucent the observer would be able to see through the colored walls. The light shinning through red and yellow would naturally produce orange within the visible color spectrum. This is the energetic connection between the inner walls and the most outer wall of the 3F Rainbow Cube. The same energetic connections hold true from observer's central perspective along the other two axes of up/down and front/back. The outer walls of the inside cubes combine blue and yellow to attain the up/down axis of green. Completing the cube matrix alignment to the rainbow, the outer walls of the inside cubes combine the colors of blue and violet to produce the front/back axis of indigo. Since the 3F Rainbow Cube aligns along the six directions of space it is very effective for aligning us with the frequencies of the visible spectrum because we view our reality along this same 3D reality of left/right, up/down and front/back. It is this 3D alignment with the way we view that makes the cube such an omnipotent geometric archetype.

The observer standing energetically at the center of the 3F Rainbow cube aligns completely with the rainbow structure. The walls of the central cube face the six directions of space. Observing inwardly or outwardly along the left/right axis the frequencies of the colors red and yellow blend together energetically to connect the observer to orange energy. Along the up and down axis the green energizes the observer standing at center. The blue and violet color frequencies blend to allow indigo to complete the symmetry of rainbow colors. The observer simply observes. Whether or not one chooses to intensify this energy by acting as a conscious conduit as the central perspective is irrelevant. The rainbow matrix alignment is happening all the time and to all points in space simultaneously. There is no exercise that can decrease this alignment for the symmetry of space is always having an affect on us and all points in space. However, becoming a pure conduit of nature's space matrix can allow our DNA, atomic structure and the water we mostly are to cohere within the pure frequencies of sacred geometrical patterns restoring health and vitality.

G.U.R.U. Gee You Are You
Generation Z Inspired, Applied and Activated
Using the RAINBOW in All Areas of Your Life to Aid Humankind and Our World.