Rainbow Math for Table of Lambda

Within nature there is a blending of sound, light and geometry. Beginning at the most basic level of creation within the universal process these three form the observer's reality. The sound, the word and/or the thought goes forth carrying upon it the intention of the sender. The light is consciousness which illumines the creation bringing it forth into manifestation. When these primordial forces go forth they interact with the matrix and divine intelligence of universal source. Sound is seven-fold as designated by the seven notes in a chord of music.

Light is seven-fold as seen within the seven colors of the color spectrum of the rainbow. Sacred Geometry and the divine matrix is seven-fold as well. There is a blending of ratio, numbers and pattern in the creative process that brings forth all manifestation. Light and sound carry their vibrational seven-fold essence and interplay with space's matrix to allow form to come into being.

The Table of Lambda originates from a table that uses two progressions of numbers to illustrate universal rhythms. Were these numbers drawn upon an English alphabet letter it would called an upside-down “V.” 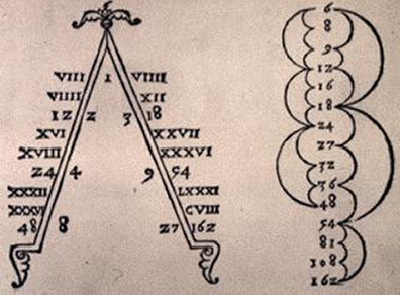 Lambda is the eleventh letter of the Greek alphabet and looks like this: Λ. The progressions of the Table of Lambda are both arithmetic and harmonic. Plato in the Timaeus connected these associations of the doubling of 2 and the tripling of 3 with the musical proportion of 6,8,9,12. It is these musical proportions which were used to generate musical octaves, the perfect fourth and the perfect fifth. Pythagoras is believed to have documented the relationship between number ratios and the vibrations generated by sound frequencies. He experimented with various sized stretched cords, glasses filled with specific amounts of water and different sized bells. He determined a clear harmony between ratios of matter and sound.