There are essentially two fields of geometric force in the universe – circular and linear. Circular is apparent as we see the shapes of planetary bodies ranging from our own earth, moon and sun to the trillions of stars everywhere. All of these appear circular in nature. Linear, on the other hand, though not commonly seen in nature is still vital to the makeup of our universe. Linear is the shortest point between two points. Experiencing gravity, we see when an apple drops from a tree it falls straight to the ground as long as no other forces are acting upon it. Similarly, water will take the path of least resistance following the shortest path as it runs down a stream. In nature it is a universal law for things to take the path of least resistance. In the grand orchestra of nature all of the plant, mineral and animal kingdoms must move to the path of least resistance, in cooperation with all other forces of nature. It is the so-called “higher” consciousness animals such as humans that can consciously “choose” to follow the path of greater resistance. It is this connection to choice that can connect us to wider circles of influence. We can and do influence the environment around us. The more we are in tune with the grand orchestra of nature, which encompasses us like a mighty spherical field, then the more we will follow the path of nature and move accordingly. If we choose linear thinking, not acting in cooperation with all, then we are limited.

Ideally, we want to live our lives in the philosophy of a combination of linear and circular thinking. We can move in the path of least resistance and we can move in cooperation with the all-encompassing field. This could be characterized as moving as a spiral. A true spiral is both linear and circular balanced to each other. As a line of intention moves through space connecting two points it is acted upon by circular forces. On a two dimensional level we see this as a spiral. Three dimensionally we would call this a universal circular vortex. Two dimensionally, a spiral is a point moving forward in a straight line that also curves to an equal distance traveled following the natural curvature found in space. The second dimension only exists in the context of geometry, in natures all energy flows along three dimensional expression. This means lines or axis of intention flow linearly and are affected by spherical forces. The net result of this is what we see in the vortex energy creating the three dimensional spin in everything from atoms to galaxies.
In Rainbow Geometry this same balance is observed as pure geometry flows along its matrix in alignment with the color spectrum. The 3F Rainbow Sphere is the third dimensional expression of circular and the Third Frequency Rainbow Tetrahedron is the third dimensional expression of linear. A sphere and tetrahedron are exact geometrical opposites to each other. A tetrahedron encloses the least volume for the most surface area – it has the greatest area/volume ratio. A sphere is the opposite moving to the other limit condition – enclosing the most volume for the least surface area.
Similar to the 3F Cube and 3F Sphere, the 3F Rainbow Tetrahedron is a third stacking of tetrahedra. The 3F Tetrahedron has three layers to it in each direction as well. It is composed of the closest packing of 11 small tetrahedra and 4 octahedrons. Standing energetically at the center of the 3F Rainbow Tetrahedron the observer connects with the universal grid matrix. 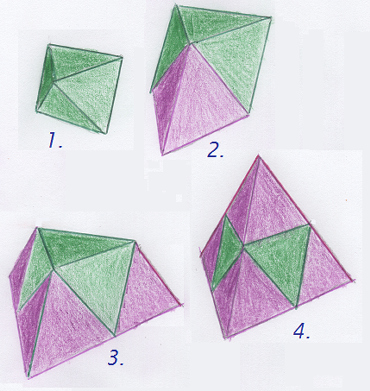 Like its two dimensional counterpart the hexagon, the closest packing of tetrahedrons in combination with octahedrons will completely and infinitely fill the space around itself. An octahedron is a platonic solid meaning all the faces of this modular are the same size and shape. It is named octahedron because it is a geometric solid that has eight equally sized triangle faces. The observer within the center of the 3F Tetrahedron is connecting with the energetic structure that can be duplicated over and over again throughout all time and space through the process of “infilling space.” The grid matrix of the 3F Tetrahedron will continually perpetuate itself.

The tetrahedron is a building block of universal structure. To visualize its perfect universal mathematics one can take three spheres and lay them on a table where the edge of each touches the one on either side of it.
This is known as “The kissing point of spheres.” Drawing a line between the absolute center point of the three spheres produces an equilateral triangle. To form a tetrahedron is as simple as adding an additional sphere to the top point or valley where the three spheres nestle together.

Drawing a line between the centers of these four spheres will define the matrix of a tetrahedron with four equilateral triangle faces. The energetic matrix of a cube is also a combination tetrahedral relationships. A star tetrahedron is two tetrahedra interwoven together to form a perfect balance to each other. The star tetrahedron has eight points that line up perfectly with the eight corners or vertices of the cube when placed inside it giving the cube its inherent stability. 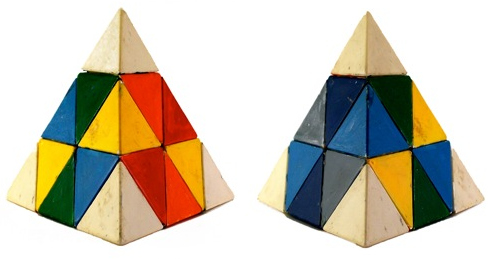 Energetically the observer who stands at the center of the 3F Tetrahedron is connecting completely to the total infilling of space. Standing energetically at the center of the 3F Rainbow Tetrahedron can allow this energy to create even more synergy as alignment happens with the color frequencies of space. Standing at center observation point one connects with the four faces of the tetrahedron and with its four hexagonal planes of rainbow spectrum energy.

Energetically, the observer first connects with the three main colors of orange, green and indigo repeated twice that form the hexagon at the bottom surface of the tetrahedron. 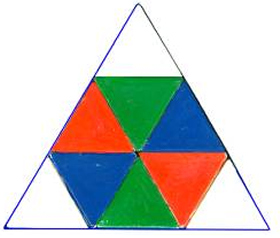 These three main colors will in turn connect to the three upper walls of the tetrahedron.
In a similar manner the “kissing of point of the spheres” formed a triangle so too does these three colors energetically move upwardly combining with the three planes of hexagonal energy above them. The observer connects with the energy matrix above within the plane faces aligned at 120 degree angles. The green bottom sector flows into the same color sector above it as does the orange and indigo. A green sector of the hexagonal plane behind connects the center of the color spectrum above with the hexagonal arrangement of the sectors of yellow-green-blue-yellow-green-blue. The yellow flows connecting to the triangle face on the right side. This yellow becomes part of the matrix of the hexagonal energy of yellow-orange-red-yellow-orange-red. The energy of the back triangular plane also connects to the plane on the left as the color frequency of blue continues to form the other end of the visible color spectrum. The blue flows into the fourth hexagon combining energetically blue-indigo-violet-blue-indigo-violet.
Standing at observer's center within the 3F Rainbow Tetrahedron produces a swirling effect from the matrix of the universe to heart center. The four hexagonal planes synergistically combine the color spectrum spiraling energy from base colors of orange, green and indigo into the three planes of energy above. The upward three hexagonal planes further synergize the space matrix as it completes an equilibrium at center. All centers at all points in space connect with this synergistic center because where ever there is a center then the energy aligns this way. There is no need to concentrate the energy. What is more vital is to simply BE. Here, in this position of beingness then we allow this natural energy structure to flow. Concentration or meditation may help this as we bring our awareness to our center and allow universal source to commune, becoming One Intention, One Heart and One Mind..