The Rainbow Equation is an equation of balance, symmetry and harmony. Each part of it flows with the rainbow spectrum of color and operates synergistically from central perspectives. The 3F Rainbow Cube connects the six primary directions of space within three axes. These axes are plane, 3D/plane and 3D. Each one carries a certain vibrational frequency to the central perspective from which they flow. Each pole of each axis acts as a complement to the opposing pole. In other words, on the plane axis the linear plane Space Symmetry Six complements the circular plane of Logos Circle Seven. In the 3D/plane axis, also called the time axis, the 3D models of Third Eye Open complement the plane diagrams of Space Time Symmetry. The third axis of the Rainbow Equation complements the opposing 3D polarities of 3F Rainbow Sphere and 3F Rainbow Tetrahedron. The observer can count the number of sectors and lines upon any of the several components of the Rainbow Equation and from these totals form many synergistic equational statements.

Looking first at the circular plane axis the observer sees in the Logos Circle Seven (l.c.7) 24 rainbow colored sectors. These 24 color sectors are equal to two neutral rainbows per sector and color. The part of the diagram that is not facing the 3F Rainbow Cube (n.f.c.) is painted in the secondary arrangement of the rainbow polarity. The part that faces the central cube is also composed of two neutral rainbows for a total of 24 sectors. These sectors f.c. are in the primary polarity rainbow arrangement. Adding together the total sectors from both sides of the Logos Circle Seven equals 48 or four neutral rainbows per sector and per color.
In the language of the Rainbow Equation this statement would read:

The complementary polarity of the circular plane l.c.7 is the linear plane called Space Symmetry Six (s.s.s.). In the s.s.s. there are 48 rainbow aspects as well. The s.s.s. is a combination of rainbow lines (r.l.), rainbow sectors (r.s.) and clear sectors (c.s.). The 6 lines are in the tri-colors of orange-green-indigo. The 6 clear sectors are represented as the space through which the lines flows. The 6 rainbow lines and 18 rainbow sectors of the s.s.s. are in the secondary rainbow polarity facing out from the 3F Rainbow Cube (n.f.c) and primary polarity colors facing cube (f.c.).
The Rainbow Equation for the Space Symmetry Six is: 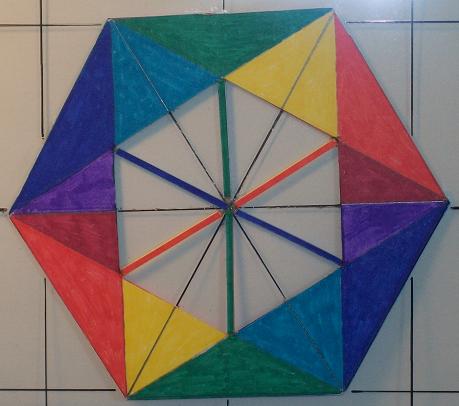 There are 2 secondary polarity rainbows and 2 primary polarity rainbows on each side of the s.s.s. for a total of 36 rainbow sectors. Accounting for the rainbow lines on each side of the s.s.s. there are a total of 12 rainbow lines. The total rainbow aspects equals 48 or 4 neutral rainbows (r.a.=4n.). As with the l.c.7 these match each other per sector and per rainbow aspect color. Note the clear sectors (c.s.) of the s.s.s. are not accounted for as they are not in the rainbow spectrum, yet reflective of clear space. In the manifestation process of light there is movement from clear space and, as it is recognized by consciousness, it is viewed as white light. When the light refracts into the visible color spectrum it is at this point it is referred to as “Rainbow Aspects.”

There are equational subsets that can be derived from the primary s.s.s equation. These are: