In “Rainbow Geometry” universal flows of finite/infinite and linear/circular come together as one. The Seven Interlinking Circles are painted with the rainbow representing the circular infinite axis. One name for these Seven Interlinking Circles is “Logos Circle Seven.” The word Logos literally means, “The Word.” Logos originates from the Greek language and can mean “an expectation”, “account” or “reason.” As a technical term in philosophy, Logos is used as a term for “principle of order and knowledge.” Logos translated into the language of “Rainbow Geometry” means, “The word, order and knowledge of seven interlinking circles painted with the rainbow.”

In the center of a circle the observer connects with energy from a maximum of directions all at once. The observer flows with their own heart center and connects completely. In Color Spectrum Sacred Geometry more synergistic connections are realized in consciousness. Connecting seven circles at their axes points following the rules of pure geometry can bring us a grand connection to universal energy. Starting at center we draw a circle of any size. Since circles are plane projections and two dimensional we move or expand into higher consciousness when we connect in four directions. We can move left/right and front/back. Unlike the movement of building the matrix of a cube we do not move up or down vertically as this would move us into a three dimensional expression. Expanding in consciousness as a circle, we can now express as five circles moving at 90 degree angles to our center. A circle of equal size to our original circle is formed to the left and right of us and to the front and back of us each touching observer's center forming a 90 degree cross. To connect the remaining two circles of the seven circle matrix one simply draws a sixth circle to connect the overlapping axes points of the left/right and forward/backward circles. The seventh circle is drawn at the furthest outside edge to enclose the inside six circles. 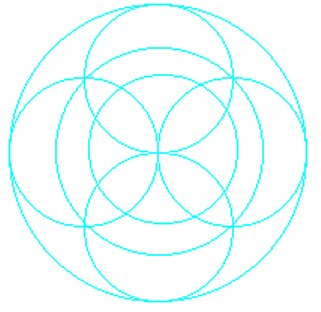 Light is electro-magnetic in nature. Light as it moves from a clear energy through a prism continues to hold the same, yet diverse, energetic properties as it forms a spectrum of color. This patternization of seven circles follows the natural alignment of the magnetic field. When we observe a magnetic flow of energy we see the poles of north and south. On a second dimensional diagrammatic level this is observed as front/back of the center of energy as the two circles touch edges at zero point or center. Energy also extends and rotates from the circle left and right. This is the east and west axis of rotation to balance the north and south circles. All four circles of energy flow from the center and touch edges at zero point, also known as observer's center. These circles of energy complete a natural functioning of energy flowing from all points in space that have manifestation. Any point in space that has matter at least the size of a quantum unit will produce these electromagnetic fields that form a ninety degree cross to each other on diagrammatic two dimensional level. Of course, in reality these circles of energy are three dimensional spheres of rotating energy. In the process of understanding how we can observe energy we first look at base relationships to the second dimension and then as we expand our conscious awareness we can observe from the third dimension and beyond.
Incorporating rainbow color spectrum with the alignment of seven circles gives us an opportunity to connect fully with both the alignment of pure geometry and the electromagnetic field. The spectrum of the rainbow can be placed upon the 24 sectors produced by the interlinking of seven circles. Following the integrity of the rainbow, the observer moves from center outward moving from the slower vibrating field of red to the highest one of violet. Energetically, at observer's center, the color frequencies connect along the axis of rotation north to south and east to west. Connecting along the axis of color frequencies from red through violet in the order of rate of vibration allows full energetic flow and resonance.

Starting in the center of the seven interlinking circles the first circle of light's spectrum is red-orange-yellow-orange - red-orange-yellow-orange. These eight sectors utilize the orange color four times, repeating to accommodate the red and yellow polarities of color on either side of them. The red is utilized only twice as it is the beginning of the visible color spectrum and combines with violet on the other end of the spectrum. Continuing to connect at observer's center, the color spectrum of light proceeds to the next ring of color. In the first ring of color the predominant color is orange. In the next most outer ring from observer's perspective the predominant color is green. The connective color sectors between these two rings are yellow and blue which in combination blend into green. Flowing from what could be called an eye shape at the center of the seven interlinking circles the energy project outwardly into the next axis and ring of color forming the center of the visible color spectrum. The eight sectors follow the integrity of the rainbow flowing yellow-green-blue-green - yellow-green-blue-green.

The outer most circle of light's visible spectrum is the indigo ring of color. In this ring the energetic connection continues as the “eye” shape tip moves outwardly from observer's center on one side to project the energy to the outer colors on the other side of the eye. Blue of the middle ring repeats to show the axis of color flow between the middle and outer rings. The energetic flow of the visible spectrum to observer's central perspective of the outer ring is blue-indigo-violet-indigo – blue-indigo-violet-indigo. This final ring of the visible light spectrum completes to full connection to observer's center. The color energy now flows in a rotational vortex from the center to the outer connecting along the two dimensional axis of space. This rotational vortex shifts 90 degrees in perspective as the colors flow from the inner to middle to outer rings. As observer we can place ourself in the center of this energy and align completely to the color spectrum rainbow of Sacred Geometry. The colors and dimensional perspectives are maintained as left/right and top/bottom flow with the integrity of nature's rainbow. Furthermore, a natural connection to the universal circular vortex is energetically connected with as the rotation of the colors move inwardly and outwardly from observer's center.