A circle connects us completely on a plane level in all directions. A sphere does the same thing with the added expansion of consciousness into the third dimension. Aligning within a sphere's center we connect in the same way we experience the universe around us; three dimensionally.
In Rainbow Geometry the three dimensional representation of the sphere is known as the “3rd Frequency Rainbow Sphere.” As with its two dimensional counterpart the “Logos Circle Seven” it completely follows the integrity of nature's color spectrum of the rainbow. The 3F Rainbow Sphere is very similar also to the structural arrangement of the 3F Rainbow Cube. In many ways it is a “Rounded-off 3F Rainbow Cube.” 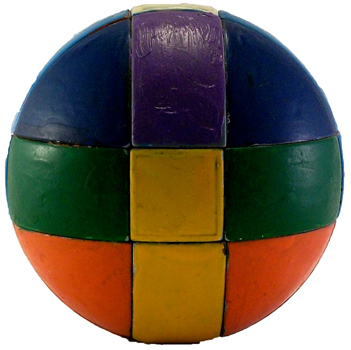 The stacking is similar in that there are three levels. The left/right, up/down and front/back outside sectors exactly match the position and size of the central outer squares found on each. As a mind puzzle these squares structurally give the puzzles the ability to rotate. It is the ability to rotate that makes both the 3F Cube and 3F Sphere align to the six directions of space. This directional alignment is more apparent with the mechanics of “third stacking.” Third stacking allows each to have a central and equal rotational axis that is in the shape of a cube. If one was to slice the 3F Sphere into the grid matrix presented by its third stacking relationship then a small cube shape would appear in at the point of its central axis.
Energetically, the observer can gain synchronized information standing in consciousness in the center of the 3F Rainbow Sphere. This information is an expansion of consciousness from its two dimensional counterpart Logos Circle Seven. Now the observer becomes the center of a sphere and connects three dimensionally in all directions. Alignment with the flow of nature's visible light spectrum flows in from the six directions of space. When we connect to the sphere's energy matrix we also connect to the torus. The torus is the Universal Circular Vortex. The torus energy field is literally seen in all of creation throughout all the universe from the smallest atomic structures to to the largest structures such as galaxies and quasars. We commonly see the effects of the toroidal field in the flow of water down a drain or tornadoes and hurricanes. In geometry a torus is defined, “A donut-shaped or a ring-shaped surface generated by rotating a circle around an axis that does not intersect the circle.” 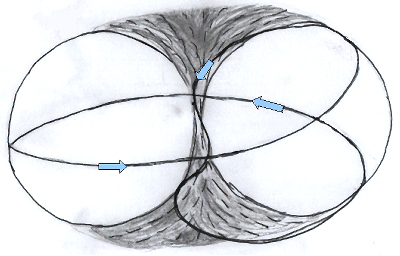 All living beings have toroidal energy systems within them which are spinning under the natural affect of the rotational field of space. In the human body and other living creature we have what is called “Chakras” that connect to our meridian centers. Chakras are seven wheel-like vortices which exist in the surface of the subtle body of living beings. They are energy centers or whorls of energy permeating from seven general points along the length of the physical body. Chakras are rotating vortices of subtle matter and are considered focal points for the reception and transmission of matrix energies. Chakras energetically flow just like the structure of the rainbow spectrum. The lower frequencies of red, orange and yellow flow along the meridian centers of the base of the spine, naval center, and solar plexus; respectively. The middle of the visible color spectrum, green, is associated with the chakra center of the heart. The higher frequencies of the color spectrum of blue, indigo and violet connect energetically respectively to the chakra centers located in the throat center, third eye center at the brow point and the crown center located at the top of the head.
Connecting to the subtle energy of the chakra rotational fields experientially with the matrix of the 3F Rainbow Sphere is a natural fit. Energetically, the shape of the sphere allows the circular energy to freely spin the rotating chakras. Standing in consciousness at observer's center of the 3F Rainbow Sphere one can connect naturally to the circular energy as well as the seven frequencies of the visible spectrum. In the same pattern of flow as the Logos Circle Seven we connect first to the red-orange-yellow on the bottom third of the 3F Rainbow Sphere. Feeling the energy of the red, move it into the root chakra at the base of the spine. Now connect the yellow chakra at the solar plexus center as you connect to the yellow sectors of the rainbow sphere. Blending these two chakras together will connect you energetically to the orange sectors and increase the rotation of the naval center chakra. Once these three chakras are energized you can connect the blue and yellow central ring of colors of the 3F Rainbow Sphere to the four green sectors and begin to energize the heart chakra. Here in the middle of your being you connect to the middle of your rainbow being harmonizing upper and lower frequencies of the chakras. At green heart center you connect the yellow solar plexus center with the blue of the throat chakra center. Moving energetically up into the upper third of the 3F Rainbow Sphere we now can connect to the upper third of the rainbow body. Here, we connect the indigo energy to the third eye center located at the brow point between the eyes. Feel the vortex energy created by the 3F Rainbow Sphere as it rotates into this region connecting the blue throat chakra with the violet crown chakra located just slightly above the head. This will stimulate these chakras to spin more freely and fully.

Standing energetically at observer's center of the 3F Rainbow Sphere you can also imagine yourself at the center of the rainbow spectrum creating a vortex of green energy combining the colors of blue and yellow. This exercise will spin the middle chakras. Now connect the blue of the central ring of color to the blue of the upper chakras and then to indigo and violet forming a second ring of colors around your higher frequency chakras. Finally, form a third ring of colors around your lower chakras connecting the orange to the red and yellow chakras. Visualize three spinning rings of colors composed of the seven colors of the rainbow.